Anglo-Scottish Under 17 – a very full weekend

The annual Under 17 round in the Anglo-Scottish team tournaments took place just before Christmas.   The team was: 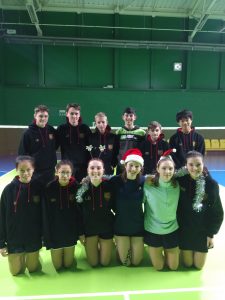 Read on for Team Manager Karen Davison’s report. A little later in the season than usual, a re-arranged U17 Anglo Scottish was held at the Tyneside Badminton Centre the weekend before Christmas, with a fantastic 8 counties taking part in the event.  Teams from Yorkshire, Cheshire, Cumbria, Glasgow, Lanarkshire, Lothian and West of Scotland along with Northumberland competed against each other over the two days.  The format of each match was 3 mixed doubles, 3 girls singles, 3 boys singles, 3 boys doubles and 3 girls doubles.  Teams consisted of 6 boys and 6 girls.

Northumberland first opponents of the weekend were Cheshire, who unfortunately came with only 5 girls.  The mixed discipline was played first and there were some close ends with partnerships of Ellen/Matty and Teeda/Jack but it was Amy/Ollie who secured the only win for Northumberland in this discipline.

In the singles our top three players of Lucy, Charlotte and Anna all fought hard and Lucy managed to push her game to a 3rd end, but no wins were recorded.  In the boys singles James and Sonny won their games comfortably: Tim pushed his opponent to high scores but was unfortunate to lose out.

In the girls doubles, Charlotte/Amy played against a very tough and experienced pair and managed to push this into a third but lost that 7-2.  Ellen/Lucy won their match convincingly and Anna/Teeda didn’t play a game as Cheshire conceded this one.  For the boys Tim/James played a thrilling match pushing to 3 ends and winning comfortably 7-1 in the third;  Matty/Sonny played well and managed to push to a 3rd end, impressive considering this was the first time the boys had played a competitive match together, but they narrowly lost to the strong Cheshire boys.  Ollie/Jack won their game victoriously.

The next match was against a very strong Yorkshire.  Northumberland knew this was going to be a tough match, but this did not deter them from competing hard and playing with conviction.

We were unable to record any wins in the mixed discipline: there were some tight ends but Yorkshire started with 3 games moving into the girls singles.  Lucy was our only girl to succeed, winning her match against the Yorkshire no. 1 seed.  But a special mention to Charlotte and Anna who played with lots of determination and recorded high scores.  The boys singles saw some amazing matches played, especially if you were a spectator!  Tim and James pushed their singles matches to a 3rd end, Tim losing 7-6 in a thrilling game; James losing 7-4 in an equally exciting match……..Sonny narrowly lost out on a 3rd end.

Into the girls doubles and Ellen/Lucy were the only pairing to secure a win in two ends with Charlotte/Amy and Teeda/Anna narrowly missing out on a 3rd end.  Ollie/Jack pushed their match to 3ends but again lost. The final score was Northumberland 2 – Yorkshire 13.  But this had been a really hard game in which the team had showed strength and tactical awareness.  The final score was not a true representation of the games witnessed by the spectators!

The next match was against Cumbria, who were hampered by being a girl short.  Our team dominated in the mixed doubles – the pairings of Tim/Charlotte, James/Lucy, Sonny/Anna won comfortably in 2 ends.  In the girls singles, Ellen narrowly lost out 7-5 in the 3rd end but Amy and Teeda secured comfortable wins.  In the boys singles Matty and Ollie had very tough opposition but fought hard, with Jack notching up another win.

Our girls doubles pairings of Charlotte/Amy and Ellen/Lucy were too strong for their opponents, winning comfortably and Teeda/Anna’s match was conceded to them.  Our boys doubles pairs of Sonny/Matty and Ollie/Jack secured wins in two ends to leave the final score at a very respectable Northumberland 11 – Cumbria 4.

Saturday’s final match was against Glasgow and was a real cracker, resulting in a great 8-7 win for Northumberland.  In the opening mixed doubles, Anna/Jack recorded a win with good scores; Ellen/Matty, Amy/Ollie fought hard but were unsuccessful.

In the singles, Lucy continued her winning streak with a very strong performance with Charlotte following suit.  Teeda showed great determination but was very unlucky – this was a testament to how much she has improved competing at this level.  For the boys, James played a hard and well fought match coming out victorious 7-3 in the 3rd end, Sonny secured a win too; Tim narrowly missed out on a win, but high scores were recorded.

Glasgow were very strong in the girls doubles.  Charlotte/Amy scored high in both ends and Ellen/Lucy played very tough opponents too, managing to push the game to a 3rd end but were very disappointed to lose the decider 7-6.  Teeda/Anna won their match well.  All three boys doubles went to three ends.  There were some very exciting games to watch and as they were all on at the same time, it was difficult for the team manager to focus on any one game!  Tim/James lost 7-5 but Sonny/Matty hit back winning their third end 7-3.  Ollie/Jack’s match lasted much longer and, with both teams gathered around the court, the volume of support rose until Northumberland came through victorious 7-3.  It had been a fantastic way to end the day.  Thank you to Anna for being part of the Northumberland team.

Sunday – and we welcomed Katrina Ho into the team to replace Anna.  The first match of the day was against Lanarkshire.  Northumberland got off to a great start in the mixed with partnerships of Matty/Ellen, Ollie/Amy and Jack/Teeda all comfortably winning their matches in straight ends.  The girls singles was tougher for our girls and even though we played our strongest girls, we were unable to find a win, although scoring high in every end.  The boys singles was won comfortably again for Northumberland with Tim, James and Sonny all victorious. This brought the score 6 – 3 in Northumberland’s favour.

Next up was a very strong, competitive and experienced Lothian team.  In the mixed Ellen/Matty played a fantastic game of traditional mixed to secure their win in the 3rd end, with Amy/Ollie and Teeda/Jack scoring high but not successful.  The six singles matches were all fought well by our players, scoring high, but Lothian just edged them all.  Special mention must go to Sonny who lost his game 15-14 15-14 but had us all watching nervously.

In the girls doubles Ellen/Lucy were the only partnership to pick up their game, but the other pairings fought well against tough opposition.  In the boys doubles and we had two 3end matches, with regular partnership Tim/James triumphantly winning 7-2 in the 3rd and Matty/Sonny narrowly losing out in the 3rd.  Jack/Ollie played really well and managed to secure the win in two ends to give the final score of Northumberland 4 – Lothian 11.  Again, the standard of the games played in this match certainly did not reflect the end score: our players all competed well and were unlucky in some of their games not to have won.

The last game of the weekend was against the West of Scotland who had the Scottish U15 and U17 No 1 seeded girls playing.  This was going to be a tough match for our girls, so it was decided to strengthen our mixed pairings.  This gamble paid off, as our regular partnerships of Tim/Charlotte and Lucy/James and relatively new partnership of Sonny/Ellen were all successful and won their matches convincingly.

The girls singles was a tough discipline for Amy, Teeda and Katrina to play, but our girls showed fight and determination to play against very talented youngsters and certainly gave a good account of themselves.  The same applied in the boys singles and Matty, Ollie and Jack were up against some really tough competition.  All of the singles went to West.

The girls doubles saw the Scottish U17 and U15 girls pair up and play Charlotte/Amy: our girls played out some good rallies and kept up the increased tempo of the match.  This was a good game to watch, but the experience and strength of the Scottish girls proved too much in the end, although the scores were high.   Ellen/Lucy won their match, playing some fantastic tactical play, moving round each other well to secure a win in 2 ends.  Teeda and Katrina, fought well, managing high scores in their game too.  In the boys doubles, James/Tim and Ollie/Jack were triumphant in their matches.  Sonny/Matty played a thrilling three end game, narrowly losing out 7-6 in the 3rd end.  The final score, in what had been a great match to round off the weekend, was Northumberland 6 – West of Scotland 9.

The overall placings had Northumberland finishing 6th out of 8 teams but 4th, 5th and 6th had each won 3 matches.  Just a very few points separated those teams.  We were well pleased with this performance.  Northumberland had played very well all weekend and stepped up their game when playing the more experienced teams.  As a team, we have come a long way and it was fantastic to see how much these players have improved.  The team spirit amongst this group is first class.

My thanks first of all to the team for competing at this level and helping me managing them with ease.  Also to parents for helping over the weekend with the paperwork, which enabled me to support the team on court – Kim Edmondson, David Graham and Karen Bodani.  Many thanks to Daniel Tinnion, Jamie Tinnon, Micky Walker and Martin Fagan for coaching support.

This entry was posted in Junior Competition, News. Bookmark the permalink.